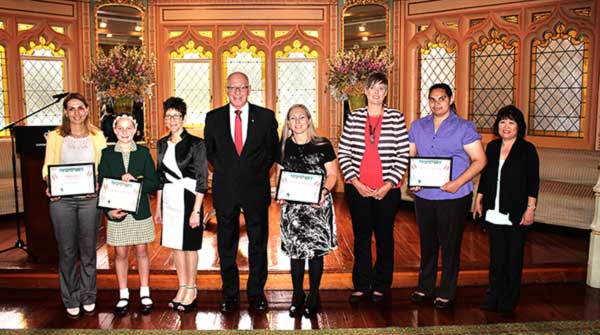 The Early Years Discussion Group (EYDG) in Broken Hill has been recognised in New South Wales for making an outstanding contribution to improving opportunities for children in the Far West.

The EYDG won the Advocacy for Children award at a ceremony in Sydney today (Wednesday 21st ) ahead of NSW Children’s Week next week.

Maari Ma Health Aboriginal Corporation’s Early Years Project Leader and EYDG Facilitator, Lesley Harvey was in Sydney to accept the award with Pearl Ferguson, from Menindee Children’s Services and Janette Jones, who works with Maari Ma and at Rainbow Preschool.

Maari Ma Chief Executive Officer, Bob Davis, said it is an honour for Maari Ma to be working with a group of service providers who share the goal to make children’s education, health and wellbeing the best it can be.

“I wholeheartedly congratulate the group for its passion and commitment and would like to thank our Director Corporate Services, Cathy Dyer, who has been a primary driver of our Early Years work.

“The EYDG was set up almost 10 years ago and was originally a group of community-based children’s services based in Broken Hill established to improve services for the benefit of all children across the region.

“While it tackles issues which are not directly health-related, they focus on some of the social determinants of health such as safety, early literacy, health literacy and quality early childhood education and care.

“At its heart, the EYDG is a collective to advocate on behalf of children: to parents, policy makers, legislators and funding bodies.

“They are a passionate, motivated and enthusiastic group of people who are striving for the best for the children of this region, no matter what their circumstances.

“They are working towards making sure that quality early childhood education and care is accessible for all kids in the Far West so that they can all achieve their potential.

“The EYDG should be commended for their work which exemplifies the core principle behind the United Nations Convention on the Rights of the Child and the theme of Children’s Week this year, “Children’s Rights are Human Rights” Mr Davis said.

The EYDG is made up of representatives from the region’s community-based and government pre-schools, long day care centres, playgroups and other early childhood support services.